Our favorite feature (and a great way to procrastinate), an interactive map of our X-ray Universe:
http://chandra.harvard.edu/photo/map/index.html

Zazzle Space Gifts for young and old alike
Posted by HightonRidley at 21:45 No comments:

A brake for spinning molecules: Precise control of rotational temperature of molecular ions for lab-based astrochemistry

Chemical reactions taking place in outer space can now be more easily studied on Earth. Scientists discovered an efficient and versatile way of braking the rotation of molecular ions. The spinning speed of these ions is related to a rotational temperature. Using an extremely tenuous, cooled gas, the researchers have lowered this temperature to about -265 °C. From this record-low value, the researchers could vary the temperature up to -210 °C in a controlled manner.


Posted by HightonRidley at 19:13 No comments:

Researchers have discovered that creating a graphene-copper-graphene 'sandwich' strongly enhances the heat conducting properties of copper, a discovery that could further help in the downscaling of electronics.

Posted by HightonRidley at 16:56 No comments: A bright spiral galaxy of the northern sky, Messier 63 is about 25 million light-years distant in the loyal constellation Canes Venatici. Also cataloged as NGC 5055, the majestic island universe is nearly 100,000 light-years across. That's about the size of our own Milky Way Galaxy. Known by the popular moniker, The Sunflower Galaxy, M63 sports a bright yellowish core in this sharp, colorful galaxy portrait. Its sweeping blue spiral arms are streaked with cosmic dust lanes and dotted with pink star forming regions. A dominant member of a known galaxy group, M63 has faint, extended features that could be the result of gravitational interactions with nearby galaxies. In fact, M63 shines across the electromagnetic spectrum and is thought to have undergone bursts of intense star formation.

Zazzle Space Gifts for young and old
Posted by HightonRidley at 15:14 No comments:

Our eyes are recently opened and we wonder at the beauty of it all #outerspace #forwidersharing
Ciro Villa originally shared:

With an estimated size of over 1,300 solar diameters, HR 5171 would be one of the 10 largest stars ever discovered and known to mankind

The star is so huge and bright that despite its large distance of 12,000 light years, it still shines with a magnitude of 6.40, thus making it almost visible to the naked eye in highly light unpolluted environments

"ESO's Very Large Telescope has revealed the largest yellow star—and one of the 10 largest stars found so far. This hypergiant has been found to measure more than 1,300 times the diameter of the Sun, and to be part of a double star system, with the second component so close that it is in contact with the main star. Observations spanning over 60 years also indicate that this remarkable object is changing very rapidly.

Using ESO's Very Large Telescope Interferometer (VLTI), Olivier Chesneau (Observatoire de la Côte d'Azur, Nice, France) and an international team of collaborators have found that the yellow hypergiant star HR 5171 A is absolutely huge—1300 times the diameter of the Sun and much bigger than was expected. This makes it the largest yellow star known. It is also in the top ten of the largest stars known—50% larger than the famous red supergiant Betelgeuse—and about one million times brighter than the Sun."

The paper: "The yellow hypergiant HR 5171 A: Resolving a massive interacting binary in the common envelope phase", by Chesneau et al., to appear in the journal Astronomy & Astrophysics. arxiv.org/pdf/1401.2628v2.pdf

Image: HR 5171, the brightest star just below the centre of this wide-field image, is a yellow hypergiant, a very rare type of stars with only a dozen known in our galaxy. Its size is over 1,300 times that of the Sun -- one of the 10 largest stars found so far. Observations with ESO's Very Large Telescope Interferometer have shown that it is actually a double star, with the companion in contact with the main star. Credit: ESO/Digitized Sky Survey 2﻿

Zazzle Space Gifts for young and old
Posted by HightonRidley at 13:59 No comments:

more »
New Space Tourist Destinations Found
Which ones will you visit when a seat becomes available?
#forwidersharing #outerspace  ﻿

Zazzle Space Gifts for young and
Posted by HightonRidley at 13:59 No comments:

Alien planets circling the most common stars in the universe may often have strange lobster-shaped oceans on their surfaces, researchers in China now say.

Posted by HightonRidley at 13:11 No comments:

A team of students has recovered crucial data from an innovative experiment that could reduce the cost of space construction -- with help from Swedish hunters.

Breathtaking, gob-smacking, awesomeness! So wish I was alive to be inside a space ship and see...

more »
Breathtaking, gob-smacking, awesomeness! So wish I was alive to be inside a space ship and see that out of the porthole!
#forwidersharing #outerspace

Fly by every galaxy we've mapped to date "Warpspeed Mr.Sulu"

Created by Dr. Mark Swinbank, Will Parr, and Dr. Peder Norberg of Durham University, using data gathered from the Galaxy and Mass Assembly catalogue and the Sloan Digital Sky Survey. Distances are to scale, but the galaxy images have been enlarged for your viewing pleasure. 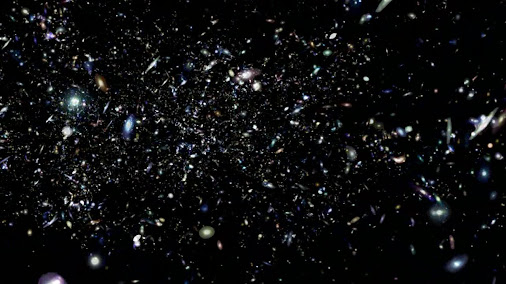 Zazzle Space Gifts for young and
Posted by HightonRidley at 00:37 No comments: