Decoding the chemical vocabulary of plants

Plants spend their entire lifetime rooted to one spot. When faced with a bad situation, such as a swarm of hungry herbivores or a viral outbreak, they have no option to flee but instead must fight to survive. What is the key to their defense? Chemistry. Thanks to this ongoing conflict, plants have evolved into amazing chemists, capable of synthesizing tens of thousands of compounds from thousands of genes. These chemicals, known as specialized metabolites, allow plants to withstand transient threats from their environment. What’s more, some of the same compounds benefit humans, with more than a third of medicinal drugs derived from plant specialized metabolites. Understanding how plants evolved this prodigious chemical vocabulary has been a longstanding goal in plant biology. A team of Carnegie scientists led by Seung Yon Rhee and Lee Chae undertook a large-scale comparative analysis of plant genomes to investigate how specialized metabolism evolved. Their findings, as reported in Science, have major implications for the way scientists search for novel beneficial metabolites in plants. To perform the study, the team developed a computational pipeline system that can transform a sequenced plant genome into a representation of the organism’s metabolism. This is known as a metabolic

The post Decoding the chemical vocabulary of plants has been published on Technology Org.

#materials
See Zazzle gifts tagged with 'science'
Posted by HightonRidley at 22:16 No comments:

Jupiter's monster storm, the Great Red Spot, was once so large that three Earths would fit inside it. But new measurements by NASA's Hubble Space Telescope reveal that the largest storm in our solar system has downsized significantly. The red spot, which has been raging for at least a hundred years, is only the width of one Earth. What is happening? One possibility is that some unknown activity in the planet's atmosphere may be draining energy and weakening the storm, causing it to shrink. The Hubble images were taken in 1995, 2009, and 2014.

Posted by HightonRidley at 16:21 No comments: 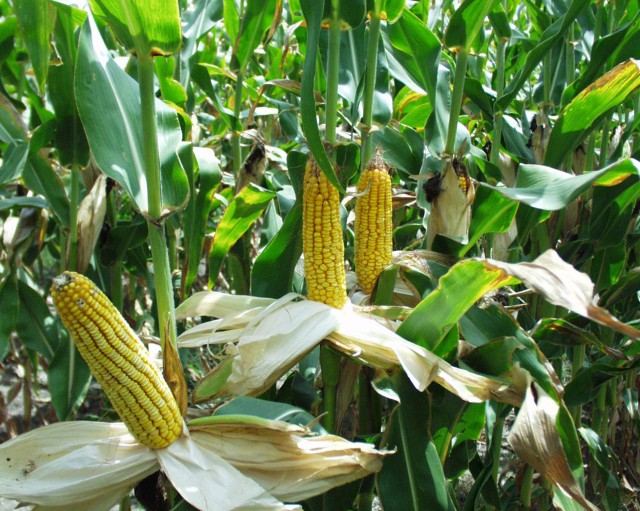 Corn (maize) is one of the crops that will retain its mineral content through this century.
St. Louis County, MN

According to the UN, wheat, rice, and maize—a mere three out of the Earth's 50,000+ edible plants—provide 60 percent of the world’s plant-derived food energy. In the developing world, they provide up to 70-80 percent of the energy in a person’s daily diet. These crops are key providers of micronutrients like zinc and iron, which they draw up from the soil.

As we continue to spew carbon dioxide into the atmosphere, however, we may be less able to rely on these crops. A meta-analysis indicates that grains and legumes grown at elevated CO2 levels have lower concentrations of zinc and iron, and some crops also have reduced protein levels.

Data was collated from 143 comparisons of crops grown at current CO2 concentrations—about 400 ppm—to those grown under free-air CO2 enrichment conditions. These typically raised the concentrations to around 550 ppm, approximating the levels we are targeted to hit in the next 40-60 years. Crops included wheat, rice, maize, soybeans, field peas, and sorghum, and they were grown in Australia, Japan, and the US. Nutrient levels were measured over one to six growing seasons.

A new solar material that has the same crystal structure as a mineral first found in the Ural Mountains in 1839 is shooting up the efficiency charts faster than almost anything researchers have seen before—and it is generating optimism that a less expensive way of using sunlight to generate electricity may be in our planet’s future. Researchers at the U.S. Energy Department’s National Renewable Energy Laboratory (NREL) are analyzing the new material, perovskite, using the lab’s unique testing capabilities and broad spectrum of expertise to uncover the secrets and potential of the semiconducting cube-like mineral. NREL has already produced three scientific papers on perovskite, reporting on the science behind the very large length of the electron pairs (or charge diffusion length) in mesostructured perovskite solar cells. The two most-studied perovskite device structures are mesostructured (of medium complexity) and planar (two-dimensional). NREL Research Fellow David Ginley, who is a world-renowned materials scientist and winner of several R&D 100 Awards, said what makes perovskite device structures so remarkable is that when processed in a liquid solution, they have unusual abilities to diffuse photons a long distance through the cell. That makes it far less likely that the electrons will recombine with their

The post Update: Unlocking Secrets of New Solar Material has been published on Technology Org.

original post »
Rising levels of CO2 around the world will significantly impact the nutrient content of crops according to a new study.
#science
» see original post http://www.bbc.co.uk/news/science-environment-27308720#sa-ns_mchannel=rss&ns_source=PublicRSS20-sa
See Zazzle gifts tagged with 'science'
Posted by HightonRidley at 16:09 No comments: Galaxies, Stars and Nebulae series A gorgeous deep space photogrpah featuring dark pillars of dust doing their best to resist erosion by the intense ultraviolet radiation from the most massive of Orion's stars.

»visit the HightonRidley store for more designs and products like this
Click to customize.
via Zazzle Astronomy market place
Posted by HightonRidley at 15:32 No comments:

Posted by HightonRidley at 14:54 No comments:

A light-speed voyage to the distant future

An enthusiastic group of schoolchildren sent a greeting to the future today, beaming a radio signal into space via an ESA tracking station in Spain.

Posted by HightonRidley at 14:52 No comments: Cruising through the outer solar system, the Voyager 2 spacecraft made its closest approach to Neptune on August 25, 1989, the only spacecraft to visit the most distant gas giant. Based on the images recorded during its close encounter and in the following days, this inspired composited scene covers the dim outer planet, largest moon Triton, and faint system of rings. From just beyond Neptune's orbit, the interplanetary perspective looks back toward the Sun, capturing the planet and Triton as thin sunlit crescents. Cirrus clouds and a dark band circle Neptune's south polar region, with a cloudy vortex above the pole itself. Parts of the very faint ring system along with the three bright ring arcs were first imaged by Voyager during the fly-by, though the faintest segments are modeled in this composited picture. Spanning 7.5 degrees, the background starfield is composed from sky survey data centered on the constellation Camelopardalis, corresponding to the outbound Voyager's view of the magnificent Neptunian system.

(Phys.org) —Taking a step toward much-coveted flexible electronics, an international research team that figured out how to coat an organic material as a thin film – like spreading butter on toast – wanted a closer look at why their spreadable organic semiconductor grew like it did.


Posted by HightonRidley at 12:09 No comments:

The target of ESA’s Rosetta mission has started to reveal its true personality as a comet, its dusty veil clearly developing over the last six weeks.

Posted by HightonRidley at 11:17 No comments:

Graphene not all good; likely to cause negative environmental impacts

Jacob D. Lanphere, a Ph.D. student at UC Riverside, holds a sample of graphene oxide. In a first-of-its-kind study of how a material some think could transform the electronics industry moves in water, researchers at the University of California, RiversideBourns College of Engineering found graphene oxide nanoparticles are very mobile in lakes or streams and therefore likely to cause negative environmental impacts if released. Graphene oxide nanoparticles are an oxidized form of graphene, a single layer of carbon atoms prized for its strength, conductivity and flexibility. Applications for graphene include everything from cell phones and tablet computers to biomedical devices and solar panels. The use of graphene and other carbon-based nanomaterials, such as carbon nanotubes, are growing rapidly. At the same time, recent studies have suggested graphene oxide may be toxic to humans. As production of these nanomaterials increase, it is important for regulators, such as the Environmental Protection Agency, to understand their potential environmental impacts, said Jacob D. Lanphere, a UC Riverside graduate student who co-authored a just-published paper about graphene oxide nanoparticles transport in ground and surface water environments. “The situation today is similar to where we were with chemicals and pharmaceuticals 30 years ago,” Lanphere said. “We just don’t

The post Graphene not all good; likely to cause negative environmental impacts has been published on Technology Org.

#materials
See Zazzle gifts tagged with 'science'
Posted by HightonRidley at 10:17 No comments:

Cascading dunes in a martian crater

A new mosaic from ESA’s Mars Express shows a swirling field of dark dunes cascading into sunken pits within a large impact crater.

Posted by HightonRidley at 10:17 No comments:

This past November, NASA launched the Mars Atmosphere and Volatile Evolution (MAVEN) mission in the hope of understanding how and why the planet has been losing its atmosphere over billions of years. Galaxies, Stars and Nebulae series A gorgeous astronomy picture featuring a distant star, named V838 Monocerotis, in the direction of the constellation of Monoceros on the outer edge of our Milky Way. The image shows the swirls of dust spiralling across trillions of miles of interstellar space, lit mainly from within by a pulse of light from the red supergiant, two years into its journey.

»visit the HightonRidley store for more designs and products like this
Click to customize.
via Zazzle Astronomy market place
Posted by HightonRidley at 03:51 No comments: