New analysis of ancient Jian wares reveals the distinctive pottery contains an unexpected and highly unusual form of iron oxide. This rare compound, called epsilon-phase iron oxide, was only recently discovered and characterized by scientists and so far has been extremely difficult to create with modern techniques. “What is amazing is that the ‘perfect synthesis conditions’ for epsilon-phase iron oxide were encountered 1000 years ago by Chinese potters,” says Catherine Dejoie, scientist at Berkley Lab’s Advanced Light Source and ETH Zurich. The study, published May 13 in Scientific Reports, could lead to an easier, more reliable synthesis of epsilon-phase iron oxide, enabling better, cheaper magnetic materials including those used for data storage. The study was performed by an international team of researchers from China, France, Switzerland, and the United States, using a variety of analysis techniques at Berkeley Lab’s Advanced Light Source, the Stanford Synchrotron Radiation Lightsource at SLAC National Accelerator Laboratory, and the Centre d’Elaboration de Matériaux et d’Etudes Structruales in France. In addition to Dejoie, Berkeley Lab scientists Kai Chen, Martin Kunz, Nobumichi Tamura and Zhi Liu were also authors on the paper. Jian wares, such as tea bowls, are famous for their shiny black glaze and variable brown and

The post Rare Form of Iron Oxide in Ancient Chinese Pottery Discovered has been published on Technology Org.

#materials
See Zazzle gifts tagged with 'science'
Posted by HightonRidley at 22:17 No comments:

We can’t run from earthquakes, but can we hide from them? 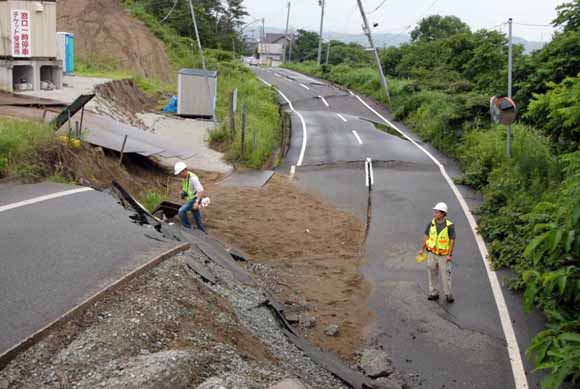 Earthquakes: from Fukushima to Haiti, they leave behind nothing but death and devastation. A tool for predicting earthquakes could save lives, but infrastructure would still be at the mercy of plate tectonics. To make us even more helpless, the forces driving tectonic plates are enormous—it seems unlikely that prevention is ever going to be realistic. So we can't predict them, and we can't stop them. But what if we could hide from earthquakes?

On the face of it, the idea sounds ridiculous. The shaking of an earthquake is due to the propagation of pressure waves along the surface of the Earth. Surely, the only way to hide from an earthquake would be to leave the Earth, right? Not exactly. In optics, we know how to hide an object from light. These invisibility cloaks have been demonstrated, and they even sort of work. And a wave is a wave, so maybe, a group of researchers thought, this might be a fruitful approach for engineering.

The key here is a concept called a metamaterial. To understand metamaterials, let's jump back into the world of optics. The way that light travels through a material is determined by nature—light may bend, slow down, or speed up as it enters different materials, depending on their properties. Materials do not have infinite variation, so it's not possible to use material properties to get light to flow around an object to make it disappear from view, for instance.

A “holographic” theory, which was conjectured to describe accurately the dynamical phenomena occurring in a black hole, has been tested numerically by a research group composed of four researchers: Masanori Hanada, Ph.D., an associate professor at Kyoto University, Yoshifumi Hyakutake, Ph. D., an associate professor at Ibaraki University, Goro Ishiki, Ph. D., an assistant professor at Kyoto University, and Jun Nishimura, Ph. D., an associate professor at KEK. Black holes are literally “black holes” residing in the cosmic space: once something goes into a black hole, it can never come out even with the speed of light. In 1974 the British physicist, Hawking, showed theoretically that a black hole actually radiates particles and evaporates little by little by considering the microscopic effect near the black hole which causes particles and anti-particles to be created and annihilated in pairs. This led him to conclude that a black hole can be viewed as an object with certain temperature. On the other hand, it has been thought difficult to understand such properties of the black hole accurately from the interior of the black hole. The reason is that as one approaches the center of the black hole, the curvature of the space-time increases, and the description of gravity in terms of

The post Computer simulation supports a “holographic” theory describing a black hole has been published on Technology Org.

VIDEO: The house that is heated by sea water

original post »
The National Trust is unveiling a new project on Thursday to suck heat from the sea to warm one of its historic homes in North Wales.
#science
» see original post http://www.bbc.co.uk/news/science-environment-27513594#sa-ns_mchannel=rss&ns_source=PublicRSS20-sa
See Zazzle gifts tagged with 'science'
Posted by HightonRidley at 16:05 No comments:

»visit the HightonRidley store for more designs and products like this
Click to customize.
via Zazzle Astronomy market place
Posted by HightonRidley at 15:19 No comments: This clear night skyscape captures the colorful glow of aurora australis, the southern lights, just outside the port city of Hobart, Tasmania, Australia, planet Earth. As if staring into the dreamlike scene, the Tasmanian Earth Resources Satellite Station poses in the center, illuminated by nearby city lights. Used to receive data from spacebased Earth observing instruments, including NASA's MODIS and SeaWiFS, the station was decommissioned in 2011 and dismantled only recently, shortly after the picture was taken on April 30. Still shining in southern skies though, the central bulge of our Milky Way galaxy and two bright satellite galaxies the Large and Small Magellanic Clouds appear in the frame. The Small Magellanic Cloud shines through the fainter red auroral band.

Graphene continues to reign as the next potential superstar material for the electronics industry, a slimmer, stronger and  much faster electron conductor than silicon. With no natural energy band-gap, however, graphene’s superfast conductance can’t be switched off, a serious drawback for transistors and other electronic devices. Various techniques have been deployed to overcome this problem with one of the most promising being the integration of ultrathin layers of graphene and boron nitride into two-dimensional heterostructures. As conductors, these bilayered hybrids are almost as fast as pure graphene, plus they are well-suited for making devices. However, tailoring the electronic properties of graphene boron nitride (GBN) heterostructures has been a tricky affair, involving chemical doping or electrostatic-gating – until now. Researchers with Berkeley Lab and the University of California (UC) Berkeley have demonstrated a technique whereby the electronic properties of GBN heterostructures can be modified with visible light. Feng Wang, a condensed matter physicist with Berkeley Lab’s Materials Sciences Division and UC Berkeley’s Physics Department, as well as an investigator for the Kavli Energy NanoSciences Institute at Berkeley, led a study in which photo-induced doping of GBN heterostructures was used to create p–n junctions and other useful doping profiles while preserving the

The post Lighting the Way to Graphene-based Devices: Light to Dope Graphene Boron Nitride Heterostructures has been published on Technology Org.

#materials
See Zazzle gifts tagged with 'science'
Posted by HightonRidley at 10:14 No comments:

The new Global Precipitation Measurement Core Observatory satellite is now in the hands of the engineers who will fly the spacecraft and ensure the steady flow of data on rain and snow for the life of the mission. The official handover to the Earth Science Mission Operations team at NASA's Goddard Space Flight Center marked the end of a successful check-out period.


Posted by HightonRidley at 08:05 No comments:

Galaxies, Stars and Nebulae series A fantastic astronomy photograph showing a panoramic view of the WR 22 and Eta Carinae regions of the Carina Nebula.

The picture was created from images taken with the Wide Field Imager on the MPG/ESO 2.2-metre telescope at ESO’s La Silla Observatory in Chile.

It's a stunning, mind-blowing, fantastic image that reveals a little of the wonder that is our universe.

»visit the HightonRidley store for more designs and products like this
Click to customize.
via Zazzle Astronomy market place
Posted by HightonRidley at 03:33 No comments: