Likely cause -- and potential prevention -- of vision deterioration in space

more »
Vision deterioration in astronauts who spend a long time in space is likely due to the lack of a day-night cycle in intracranial pressure. But using a vacuum device to lower pressure for part of each day might prevent the problem, researchers said.

more »
Scientists are planning to send a deep-space probe to a metal asteroid, enabling them to see what is believed to be a planetary core. Psyche, an asteroid orbiting the sun between Mars and Jupiter, is made almost entirely of nickel-iron metal.

more »
For the first time, it is now possible to produce functional OLED electrodes from graphene. The OLEDs can, for example, be integrated into touch displays, and the miracle material graphene promises many other applications for the future.

via Science Daily
Posted by HightonRidley at 18:15 No comments: 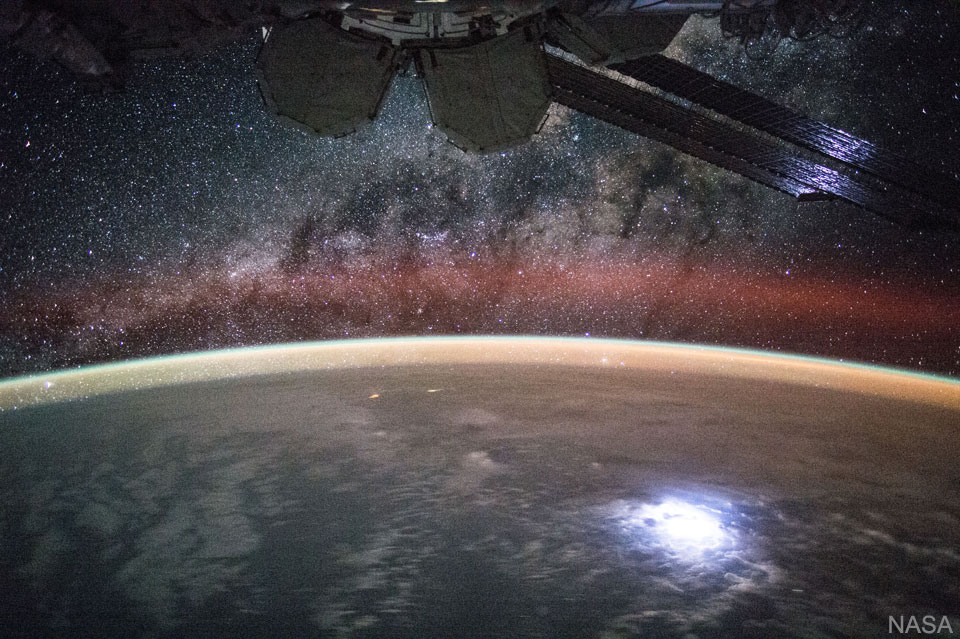 If you could circle the Earth aboard the International Space Station, what might you see? Some amazing vistas, one of which was captured in this breathtaking picture in mid-2015. First, visible at the top, are parts of the space station itself including solar panels. Just below the station is the band of our Milky Way Galaxy, glowing with the combined light of billions of stars, but dimmed in patches by filaments of dark dust. The band of red light just below the Milky Way is airglow -- Earth's atmosphere excited by the Sun and glowing in specific colors of light. Green airglow is visible below the red. Of course that's our Earth below its air, with the terminator between day and night visible near the horizon. As clouds speckle the planet, illumination from a bright lightning bolt is seen toward the lower right. Between work assignments, astronauts from all over the Earth have been enjoying vistas like this from the space station since the year 2000.

The BASE collaboration at CERN reports the most precise measurement ever made of the magnetic moment of the antiproton, allowing a fundamental comparison between matter and antimatter (Image: Maximilien Brice/ CERN)

In a paper published today in the journal Nature Communications, the BASE collaboration at CERN reports the most precise measurement ever made of the magnetic moment of the antiproton, allowing a fundamental comparison between matter and antimatter. The BASE measurement shows that the magnetic moments of the proton and antiproton are identical, apart from their opposite signs, within the experimental uncertainty of 0.8 parts per million. The result improves the precision of the previous best measurement by the ATRAP collaboration in 2013, also at CERN, by a factor of 6.

At the scale of elementary particles, an almost perfect symmetry between matter and antimatter exists. On cosmological scales, however, the amount of matter outweighs that of antimatter. Understanding this profound contradiction demands that physicists compare the fundamental properties of particles and their antiparticles with high precision.

BASE uses antiprotons from CERN’s unique antimatter factory, the Antiproton Decelerator (AD), and is designed specifically to perform precision measurements of the antimatter counterparts of normal matter particles. The magnetic moment, which determines how a particle behaves when immersed in a magnetic field, is one of the most studied intrinsic characteristics of a particle. Although different particles have different magnetic behaviour, the magnetic moments of protons and antiprotons are supposed to differ only in their sign as a consequence of so-called charge-parity-time symmetry. Any difference in their magnitudes would challenge the Standard Model of particle physics and would offer a glimpse of new physics.

To perform the experiments, the BASE collaboration cools down antiprotons to the extremely low temperature of about 1 degree above absolute zero, and traps them using sophisticated electromagnetic containers so that they do not come into contact with matter and annihilate (thanks to such devices, BASE has recently managed to store a bunch of antiprotons for more than one year). From here, antiprotons are fed one-by-one to further traps where their behaviour under magnetic fields allows researchers to determine their intrinsic magnetic moment. Similar techniques have already been successfully applied in the past to electrons and their antimatter partners, positrons, but antiprotons present a much bigger challenge because their magnetic moments are considerably weaker. The new BASE measurement required a specially designed magnetic “bottle” that is more than 1000 times stronger than that used in electron/positron experiments.

“This measurement is so far the culmination point of 10 years of hard work by the BASE team,” said Stefan Ulmer, spokesperson of the BASE collaboration. “Together with other AD experiments, we are really making rapid progress in our understanding of antimatter.”

BASE now plans to measure the antiproton magnetic moment using a new trapping technique that should enable a precision at the level of a few parts per billion – i.e. a factor of 200 to 800 improvement. “The implementation of this method is much more challenging than the method which was used here and will require several additional iteration steps,” says first author Hiroki Nagahama.


via CERN: Updates for the general public
http://home.cern/about/updates/2017/01/base-precisely-measures-antiprotons-magnetic-moment

Posted by HightonRidley at 10:47 No comments:


Fuel cells are a technology of interest as future energy sources, as they aid in production of sustainable energy using simple hydrocarbons as fuels. They function by a simple operational mechanism with fuel oxidation on one side, and oxidant reduction on the other side of a membrane, liberating electrons thus contributing to electrical energy generation. A wide variety of fuels, such as methanol, ethanol, and propanol have been used so far. Among these fuels, methanol remains a favourable candidate due to its high energy density, ease of handling and other operational characteristics.

Hence methanol fuel cells find their potential use in laptop chargers, military applications or other scenarios where access to electricity is difficult. However the wider spectrum of commercial potential for methanol systems is greatly hindered by methanol cross over in the membrane. Cross over is the leaking of methanol from the anode to the cathode through the membrane, which creates a short circuit and adversely affects fuel cell performance. Cross over is mitigated by using a barrier layer on top of the membrane used. Previous work in this field tested different materials that yielded improved performance by reducing methanol crossover, but those materials also significantly reduced proton transport thereby significantly reducing performance, as membrane proton conductivity is one of the dominant factors for energy generation in fuel cells.

It is known that Andre Geim and co-workers (Nature, A.K. Geim et.al 2014), discovered proton transfer through single layer graphene and other 2D materials. Also graphene is known for its dense lattice packing structure, inhibiting the passage of methanol and other hydrocarbon-based molecules across the membrane. However, the actual application of these 2D materials in fuel cell systems has not yet been realized. Researchers from the School of Chemical Engineering and Analytical Science at the University of Manchester have come up with a way to utilize these 2D materials in an actual operating direct methanol fuel cell. In their recently published paper in the journal Advanced Energy Materials (Holmes et al, 2016), they have shown that the addition of single layer graphene by chemical vapour deposition on to the membrane area has significantly reduced methanol cross over, while simultaneously causing negligible resistance to proton transport, thereby enhancing the cell performance by 50%. This first proof of concept shows that 2D materials make for excellent barrier materials for fuel cells.

Moreover, the work shows that high efficiency membraneless fuel cells could be realized in the near future. This technology could further be extended to other fuel cells types, namely hydrogen fuel cells.

Hydrogen fuel cells suffer from the usage of high cost humidifiers that keep the membrane in a humid atmosphere for improved proton conductivity. Graphene however, as reported in earlier studies, showed improved proton conductivity with increasing temperature without the need for humidifier systems. Utilizing graphene in fuel cells could make a significant contribution to satisfying future energy demands.

Posted by HightonRidley at 09:11 No comments:

more »
Like cosmic lighthouses sweeping the universe with bursts of energy, pulsars have fascinated and baffled astronomers since they were first discovered 50 years ago. In two studies, international teams of astronomers suggest that recent images from NASA's Chandra X-ray Observatory of two pulsars -- Geminga and B0355+54 -- may help shine a light on the distinctive emission signatures of pulsars, as well as their often perplexing geometry.