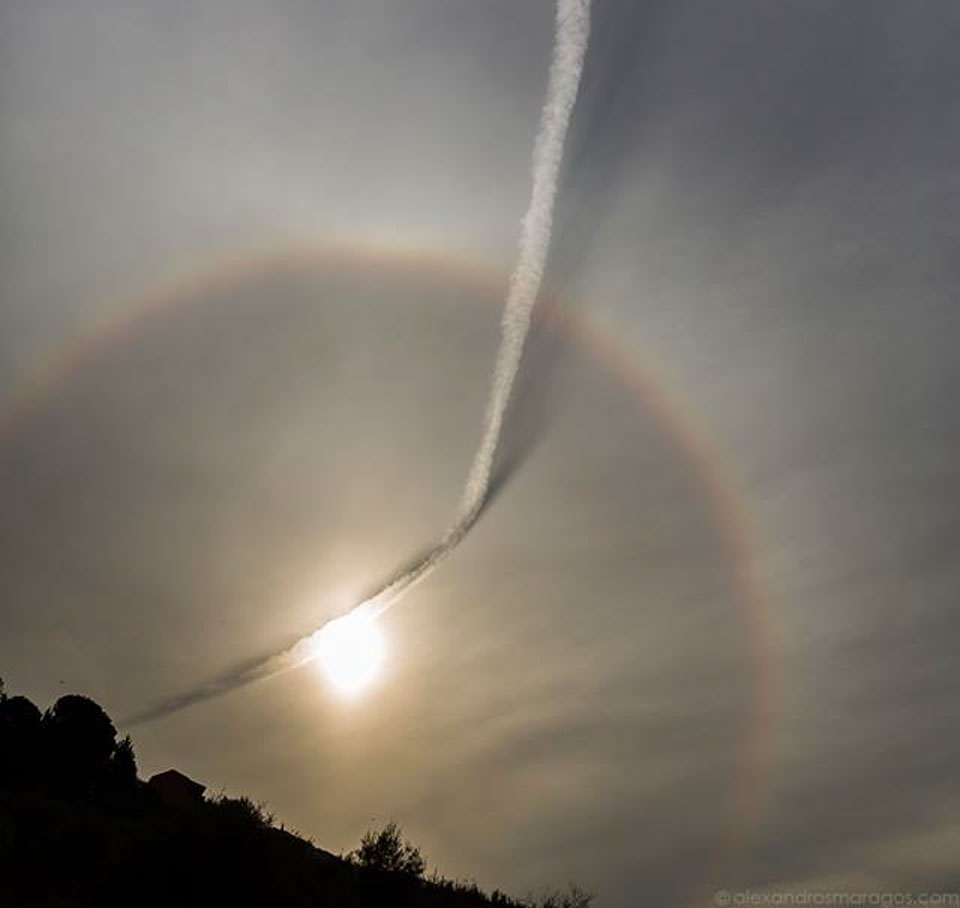 What's happened to the sky? Several common features of the daytime sky are interacting in uncommon ways. First, well behind the silhouetted hills, is the typically bright Sun. In front of the Sun are thin clouds, possibly the home to a layer of hexagonal ice crystals that together are creating the 22 degree halo of light surrounding the Sun. The unusual bent line that crosses the image is a contrail -- a type of cloud created by a passing airplane. Much of the contrail must actually be further away than the thin cloud because it casts a shadow onto the cloud, giving an unusual three-dimensional quality to the featured image. The featured image was taken in late January in the city of Patras in West Greece.

The ex-MRI scanner magnet has travelled all the way from Australia to be used in an experiment at CERN’s ISOLDE facility (Image: Karl Johnston/CERN)

A team of researchers has successfully taken a magnet from a decommissioned MRI scanner used by a Brisbane, Australia, hospital for scanning patients, and recycled it for use in an experiment at CERN’s ISOLDE facility.

The ISOLDE Solenoidal Spectrometer (ISS) project will design and construct instruments to explore the nuclear reactions that occur when stars explode in supernovae.

The decision was made to re-commission the 15-year-old magnet when it was discovered that building a new one could cost almost 1,250,000 CHF. Instead, the entire process of shipping and re-commissioning the retired MRI magnet was around 160 000 CHF (€149,500).

“Finding a suitable MRI magnet that can go up to a strength of 4 Tesla is not easy, but we found out about this Australian magnet from our collaborators at Argonne National Laboratory and it was exactly what we needed,” explains Professor Robert Page,  of the University of Liverpool, who leads the international collaboration using the magnet.

ISOLDE is CERN’s radioactive ion beam facility, where they study the different properties of hundreds of atomic isotopes.

Once the superconducting magnet arrived at CERN, the cryogenics team got to work cooling it with liquid helium, to see if it was still capable of producing the strong fields required by the ISS project.

The project, will take beams of radioactive ions, produced by bombarding heavy nuclei with protons from the Proton Synchrotron Booster (PSB) at CERN, and fire them at a heavy hydrogen (deuterium) target inside the magnet itself. As the particles are fired at the target, neutrons are transferred to some particles to create ions with unusual numbers of protons and neutrons – these are the exotic ions studied at ISOLDE.

But this process leaves protons without their neutron partner. The strong magnetic field from the MRI magnet causes these protons to spiral backwards and land, just nanoseconds later, on a silicon detector.

From the position of the proton on the detector and its energy, the energy levels of the exotic ions can be determined. In this way the team hopes to understand how the forces in atomic nuclei with differing numbers of protons and neutrons give rise to their very different properties, and how elements are created by supernovae.


via CERN: Updates for the general public
http://home.cern/about/updates/2017/04/retired-mri-scanner-gets-new-life-studying-stars

Posted by HightonRidley at 10:26 No comments:

more »
Graphene-oxide membranes have attracted considerable attention as promising candidates for new filtration technologies. Now the much sought-after development of making membranes capable of sieving common salts has been achieved.

Posted by HightonRidley at 03:38 No comments:

Reusable carbon nanotubes could be the water filter of the future, says study

more »
Enhanced single-walled carbon nanotubes offer a more effective and sustainable approach to water treatment and remediation than the standard industry materials--silicon gels and activated carbon--according to a new paper.

via Science Daily
Posted by HightonRidley at 03:38 No comments: