more »
The first 3-D quantum liquid crystals may have applications in quantum computing, report scientists. Liquid crystals fall somewhere in between a liquid and a solid: they are made up of molecules that flow around freely as if they were a liquid but are all oriented in the same direction, as in a solid. Liquid crystals can be found in nature, such as in biological cell membranes. Alternatively, they can be made artificially -- such as those found in the liquid crystal displays commonly used in watches, smartphones, televisions, and other items that have display screens.

via Science Daily
Posted by HightonRidley at 20:58 No comments:

more »
Astronomers have detected for the first time multiple images from a gravitationally lensed Type Ia supernova. The new observations suggest promising new avenues for the study of the accelerated expansion of the universe, gravity and distribution of dark matter in the universe.

more »
Storms from the sun can affect our power grids, railway systems and underground pipelines. Now scientists and engineers from NASA have assessed the state of science surrounding space weather.

more »
Mineral deposits in a region on Mars called Northeast Syrtis Major suggest a plethora of once-habitable environments. By mapping those deposits in the region's larger geological context, the research could help set the stage for a possible rover mission.

Hubble Celebrates Its Anniversary with a Spectacular Pair of Galaxies

When the Hubble Space Telescope launched aboard the Space Shuttle Discovery on April 24, 1990, astronomers could only dream what they might see. Now, 27 years and more than a million observations later, the telescope delivers yet another magnificent view of the universe — this time, a striking pair of spiral galaxies much like our own Milky Way. These island cities of stars, which are approximately 55 million light-years away, give astronomers an idea of what our own galaxy would look like to an outside observer. The edge-on galaxy is called NGC 4302, and the tilted galaxy is NGC 4298. Although the pinwheel galaxies look quite different because they are angled at different positions on the sky, they are actually very similar in terms of their structure and contents.


via Hubble - News feed
http://hubblesite.org/news_release/news/2017-14
Posted by HightonRidley at 17:42 No comments:

more »
Breakthrough Listen -- the initiative to find signs of intelligent life in the universe -- has released its 11 events ranked highest for significance as well as summary data analysis results. It is considered unlikely that any of these signals originate from artificial extraterrestrial sources, but the search continues. 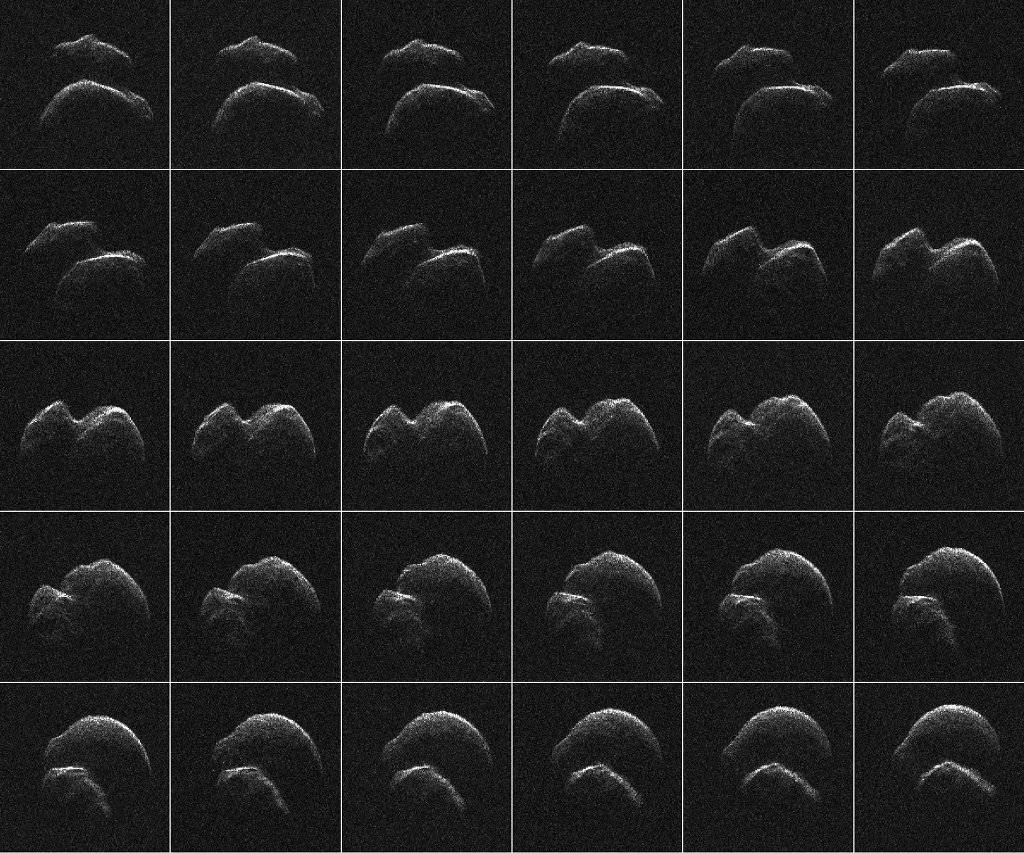 A day before its closest approach, asteroid 2014 JO25 was imaged by radar with the 70-meter antenna of NASA's Goldstone Deep Space Communications Complex in California. This grid of 30 radar images, top left to lower right, reveals the two-lobed shape of the asteroid that rotates about once every five hours. Its largest lobe is about 610 meters across. On the list of Potentially Hazardous Asteroids, this space rock made its close approach to our fair planet on April 19, flying safely past at a distance of 1.8 million kilometers. That's over four times the distance from the Earth to the Moon. The asteroid was a faint and fast moving speck visible in backyard telescopes. Asteroid 2014 JO25 was discovered in May 2014 by the Catalina Sky Survey, a project of NASA's Near-Earth Objects Observations Program in collaboration with the University of Arizona.