more »
Images made with the continent-wide Very Long Baseline Array detect the orbital motion of two supermassive black holes as they circle each other at the center of a distant galaxy. The two black holes themselves may eventually merge in an event that would produce gravitational waves that ripple across the universe. 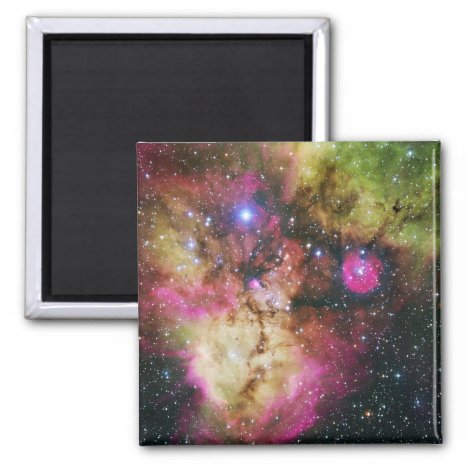 
Posted by HightonRidley at 17:27 No comments:

more »
In the world of electronics, where the quest is always for smaller and faster units with infinite battery life, topological insulators (TI) have tantalizing potential. Scientists report they have created a TI film just 25 atoms thick that adheres to an insulating magnetic film, creating a 'heterostructure.'

Posted by HightonRidley at 17:06 No comments:

The M81 Galaxy Group through the Integrated Flux Nebula 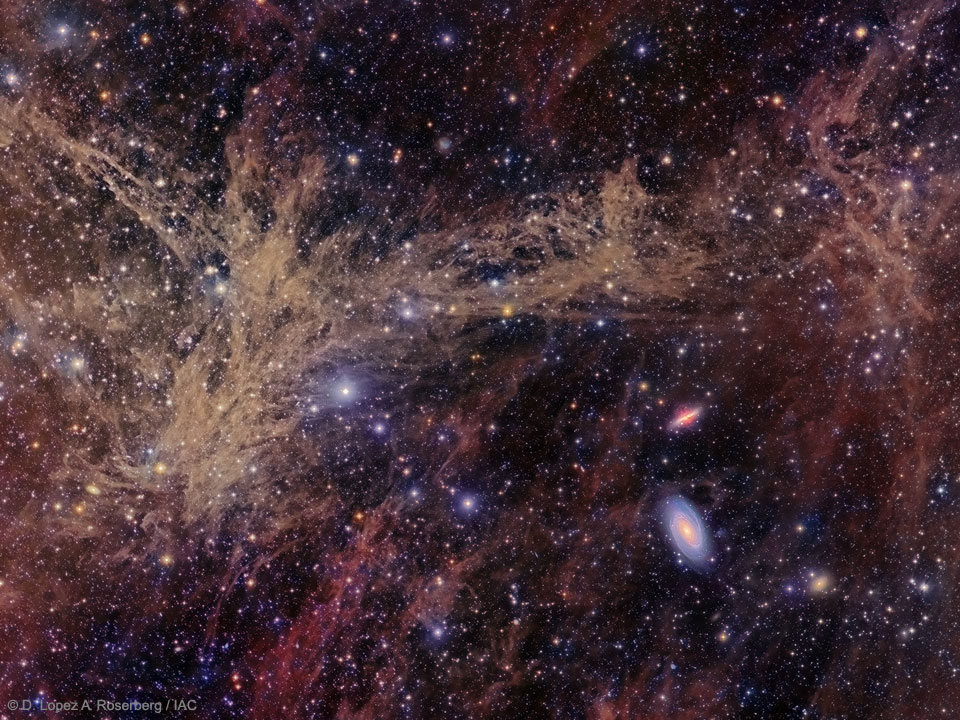 Distant galaxies and nearby nebulas highlight this deep image of the M81 Group of galaxies. First and foremost in this 80-exposure mosaic is the grand design spiral galaxy M81, the largest galaxy in the image, visible on the lower right. M81 is gravitationally interacting with M82 just above it, a large galaxy with an unusual halo of filamentary red-glowing gas. Around the image many other galaxies from the M81 Group of galaxies can be seen, as well as many foreground Milky Way stars. This whole galaxy menagerie is seen through the glow of an Integrated Flux Nebula (IFN), a vast and complex screen of diffuse gas and dust also in our Milky Way Galaxy. Details of the red and yellow IFN, digitally enhanced, were imaged by a new wide-field camera recently installed at the Teide Observatory in the Canary Islands of Spain.

(Image: Official Office of the President of the Republic of Lithuania by Robertas Dačkus)

“Signing an agreement with CERN means recognition of Lithuanian science and talents as well as our common efforts in strengthening research, innovation and centres of excellence in the Baltic region,” said Dalia Grybauskaitė, President of the Republic of Lithuania.  “We are proud of this Associate Membership - cooperation with CERN gives a new impetus for economic growth, provides an opportunity for us to take part in global research and opens a wide horizon for our youth.”

“The involvement of Lithuanian scientists at CERN has been growing steadily over the past decade, and Associate Membership can now serve as a catalyst to further strengthen particle physics and fundamental research in the country,” said Fabiola Gianotti. “We warmly welcome Lithuania into the CERN family, and look forward to enhancing our partnership in science, technology development and education and training.”

Lithuania’s relationship with CERN dates back to 2004, when an International Cooperation Agreement was signed between the Organization and the government of the Republic of Lithuania. This set priorities for the further development of scientific and technical cooperation between CERN and Lithuania in high-energy physics. One year later, in 2005, a Protocol to this Agreement was signed, paving the way for the participation of Lithuanian universities and scientific institutions in high-energy particle physics experiments at CERN.

Lithuania has contributed to the CMS experiment since 2007 when a Memorandum of Understanding (MoU) was signed marking the beginning of Lithuanian scientists’ involvement in the CMS collaboration. Lithuania has also played an important role in database development at CERN for CMS data mining and data quality analysis. Lithuania actively promoted the BalticGrid in 2005, allocating 100,000 CPU hours to CMS in 2007.

In addition to its involvement in the CMS experiment, Lithuania is part of two collaborations that aim to develop detector technologies to address the challenging upgrades needed for the High-Luminosity LHC.

Since 2004, CERN and Lithuania have also successfully collaborated on many educational activities aimed at strengthening the Lithuanian particle physics community. Lithuania has been participating in the CERN Summer Student programme and 53 Lithuanian teachers have taken part in CERN’s high-school teachers programme.

Associate Membership will allow Lithuania to take part in meetings of the CERN Council and its committees (Finance Committee and Scientific Policy Committee). It will also make Lithuanian nationals eligible for limited-duration staff appointments. Last but not least, Lithuanian industry will be entitled to bid for CERN contracts, opening up opportunities for industrial collaboration in areas of advanced technology.


via CERN: Updates for the general public
http://home.cern/about/updates/2017/06/lithuania-become-associate-member-cern

Posted by HightonRidley at 11:27 No comments:

Enlarged Region of The Omega Nebula Button
Galaxies, Stars and Nebulae series: Like the fury of a raging sea, this bubbly ocean of glowing hydrogen, oxygen, and sulphur gas lies in the extremely massive and luminous…


Posted by HightonRidley at 08:48 No comments: