Trending: Where and How to See the Total Eclipse This Summer in the U.S.

more »
On Aug. 21, the sun’s disappearance behind the moon will be visible from the Oregon coast to South Carolina. Here are eight places to see it.
via New York Times
Posted by HightonRidley at 20:50 No comments:

more »
A novel design strategy has been revealed for efficient light-emitting molecules with applications in next-generation displays and lighting through renewed investigation of a molecule that slightly changes its chemical structure before and after emission.

via Science Daily
Posted by HightonRidley at 19:12 No comments:

more »
The world's smallest and lightest quantum-communication transmitter has now been developed, report researchers who have succeeded in the demonstration of the first quantum- communication experiment from space, receiving information from the satellite in a single-photon regime in an optical ground station in Koganei city. This is a major step toward building a global long-haul and truly-secure satellite communication network.

more »
It's ultra-thin, electrically conducting at the edge and highly insulating within – and all that at room temperature. Physicists have developed a promising new material.

via Science Daily
Posted by HightonRidley at 16:22 No comments: 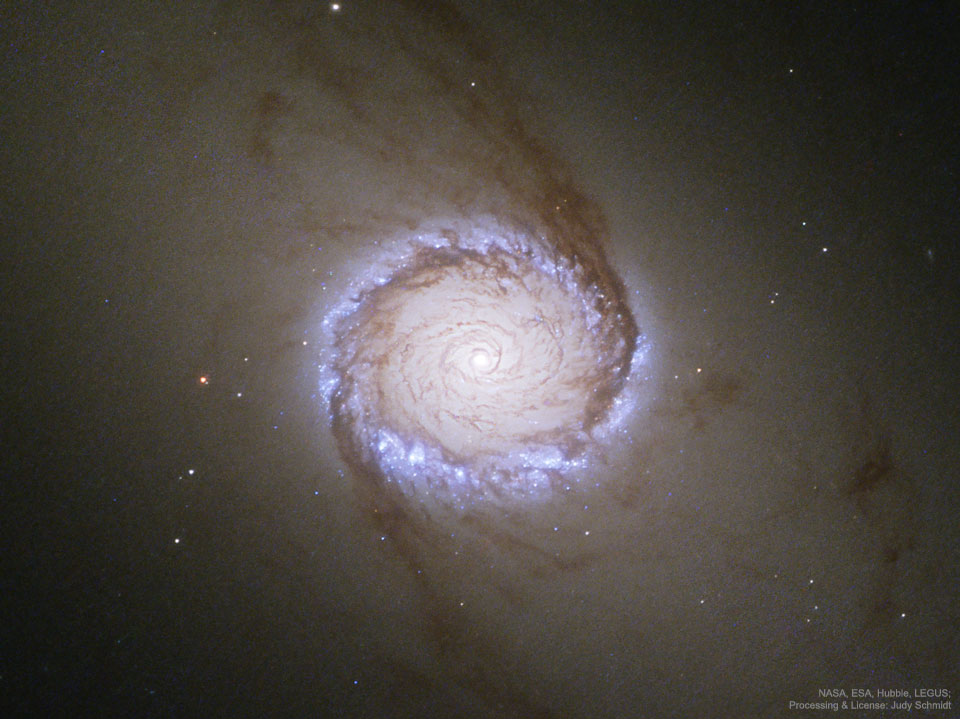 What's happening around the center of this spiral galaxy? Seen in total, NGC 1512 appears to be a barred spiral galaxy -- a type of spiral that has a straight bar of stars across its center. This bar crosses an outer ring, though, a ring not seen as it surrounds the pictured region. Featured in this Hubble Space Telescope image is an inner ring -- one that itself surrounds the nucleus of the spiral. The two rings are connected not only by a bar of bright stars but by dark lanes of dust. Inside of this inner ring, dust continues to spiral right into the very center -- possibly the location of a large black hole. The rings are bright with newly formed stars which may have been triggered by the collision of NGC 1512 with its galactic neighbor, NGC 1510.

An artist peeks behind CERN’s facade

For Laura Couto Rosado, a young Swiss designer, CERN is an ideal setting to draw inspiration from science for artistic research and to develop new works of art.

Laura Couto Rosado is the winner of 2017 Arts at CERN’s ‘Collide Pro Helvetia’ prize, which enables artists to spend three months at CERN, to be inspired by scientists and the world of science.

"My practice as a designer is inspired not only by natural phenomena, but also by the study of them, the science that leads to and the technologies that are based on them. I have always used the basic principles of physics to develop hybrid and intriguing design product," says Rosado, describing her work.

Rosado explains that she came to CERN with preconceived ideas for the project she will produce at the end of her residency. Now, one month into her time here, she says: “The knowledge I have acquired through my meetings with physicists exceeds all my expectations. They have driven me to focus my research in a more refined, subtle and creative way. For now, the best way for me to approach my project is to let the physicists express themselves by focusing on their own experiences, sharing their details and personal stories. Although that may be at the risk of losing the nuances of my own ideas."

Collide Pro Helvetia Award is organized by Arts at CERN is part of an on-going partnership with the Swiss Arts Council Pro Helvetia to offer Swiss artists, designers or artistic collectives a residency at CERN to explore the possibilities of the interactive devices and art in connection with scientific research.

You can find out more about Arts at CERN here.


via CERN: Updates for the general public
http://home.cern/about/updates/2017/07/artist-peeks-behind-cerns-facade

Posted by HightonRidley at 12:29 No comments: Space Science Image of the Week: The BepiColombo spacecraft modules stacked up in launch configuration for the last time in Europe
via ESA Space Science
http://www.esa.int/spaceinimages/Images/2017/07/BepiColombo_spacecraft_stack

Posted by HightonRidley at 09:17 No comments: