Unique type of object discovered in our solar system

more »
Astronomers have observed the intriguing characteristics of an unusual type of object in the asteroid belt between Mars and Jupiter: two asteroids orbiting each other and exhibiting comet-like features, including a bright coma and a long tail. This is the first known binary asteroid also classified as a comet.

Comet or Asteroid? Hubble Discovers that a Unique Object is a Binary

An Asteroid That Split in Two 5,000 Years Ago Is Spouting a Comet Tail

Astronomers categorize the minor bodies in the solar system according to their location and physical composition. Comets are a loose collection of ice and dust that fall in toward the Sun from beyond the orbits of the major planets, and grow long tails of dust and gas along the way. Asteroids are rocky or metallic and are relegated to a zone between Mars and Jupiter. But nature isn't that tidy. The Hubble Space Telescope photographed a pair of asteroids orbiting each other that have a tail of dust, which is definitely a comet-like feature. The odd object, called 2006 VW139/288P, is the first known binary asteroid that is also classified as a main-belt comet. Roughly 5,000 years ago, 2006 VW139/288P probably broke into two pieces due to a fast rotation.


via Hubble - News feed
http://hubblesite.org/news_release/news/2017-32
Posted by HightonRidley at 19:31 No comments:

more »
Scientists are proposing a new way of understanding the cooling and transfer of heat from terrestrial planetary interiors and how that affects the generation of the volcanic terrains that dominate the rocky planets.

more »
Moving, vibrating and leaping molecules make up our world. However, capturing their movement is not an easy task. Scientists were able to see the movement of molecules stored inside a graphene pocket without the need to stain them. This study paves the way for observing the dynamics of life building blocks, like proteins and DNA, as well as the self-assembly of other materials.

via Science Daily
Posted by HightonRidley at 18:02 No comments:

more »
Could the flapping of a butterfly's wings in Costa Rica set off a hurricane in California? For most people, this hypothetical scenario may be difficult to imagine on Earth -- particularly when a real disaster strikes. Yet, in space, similarly small fluctuations in the solar wind as it streams toward the Earth's magnetic shield actually can affect the speed and strength of 'space hurricanes,' a researcher explains. 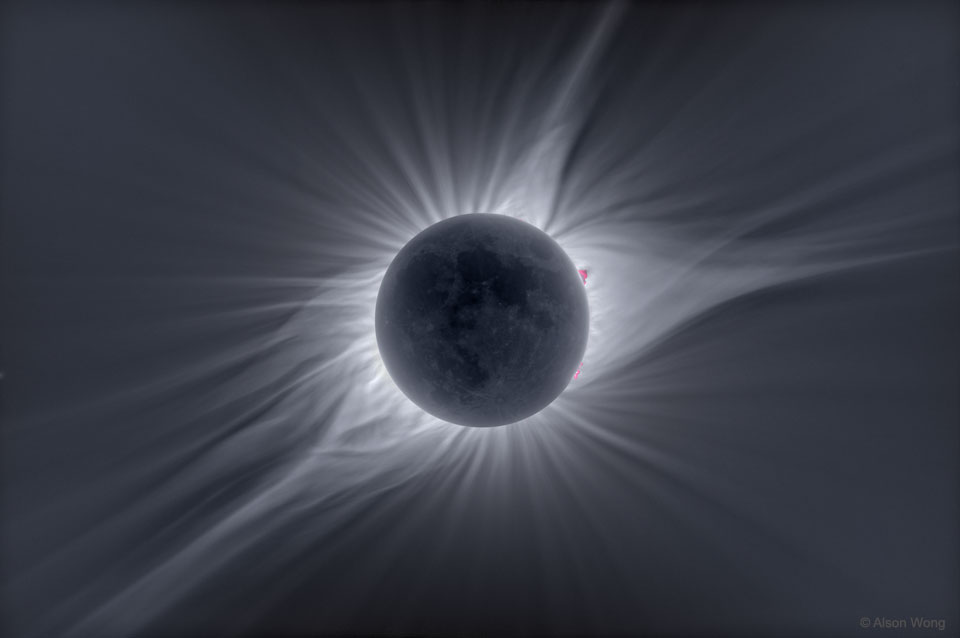 Most photographs don't adequately portray the magnificence of the Sun's corona. Seeing the corona first-hand during a total solar eclipse is unparalleled. The human eye can adapt to see coronal features and extent that average cameras usually cannot. Welcome, however, to the digital age. The featured picture is a combination of forty exposures from one thousandth of a second to two seconds that, together, were digitally combined and processed to highlight faint features of the total solar eclipse that occurred in August of 2017. Clearly visible are intricate layers and glowing caustics of an ever changing mixture of hot gas and magnetic fields in the Sun's corona. Looping prominences appear bright pink just past the Sun's limb. Faint details on the night side of the New Moon can even be made out, illuminated by sunlight reflected from the dayside of the Full Earth.

Posted by HightonRidley at 13:17 No comments: