more »
Type I and Type II active galaxies do not just appear different -- they are, in fact, very different from each other, both structurally and energetically, new research shows. According to the results of a new study, the key factor that distinguishes Type I and Type II galaxies is the rate at which their central black holes -- or active galactic nuclei -- consume matter and spit out energy.

more »
While people across the nation gazed at August's total solar eclipse from Earth, a bread loaf-sized NASA satellite had a front row seat for the astronomical event.

New light shed on how Earth and Mars were created

more »
Analysing a mixture of earth samples and meteorites, scientists have shed new light on the sequence of events that led to the creation of the planets Earth and Mars.

more »
The first observation of gravitational waves has been discovered by by three different detectors, marking a new era of greater insights and improved localization of cosmic events now available through globally networked gravitational-wave observatories.

more »
It was bigger than the Super Bowl. Many more watched it in person or electronically than voted last year.
via New York Times
Posted by HightonRidley at 17:06 No comments:

Trilobites: A Deep Blue Vision of Earth From an Asteroid Hunter

more »
As it slingshotted past Earth at 19,000 miles per hour on Friday, NASA’s Osiris-Rex spacecraft made a composite portrait of the planet.
via New York Times
Posted by HightonRidley at 17:06 No comments:

The strange structures of the Saturn nebula

more »
The spectacular planetary nebula NGC 7009, or the Saturn Nebula, emerges from the darkness like a series of oddly-shaped bubbles, lit up in glorious pinks and blues. This colourful image was captured by the MUSE instrument on ESO's Very Large Telescope (VLT). The map -- which reveals a wealth of intricate structures in the dust, including shells, a halo and a curious wave-like feature -- will help astronomers understand how planetary nebulae develop their strange shapes and symmetries.

more »
Researchers have discovered how graphene, a single-atom-thin layer of carbon, can be forged into three-dimensional objects by using laser light. A striking illustration was provided when the researchers fabricated a pyramid with a height of 60 nm, which is about 200 times larger than the thickness of a graphene sheet. The pyramid was so small that it would easily fit on a single strand of hair.

via Science Daily
Posted by HightonRidley at 14:56 No comments:

Layers of a Total Solar Eclipse 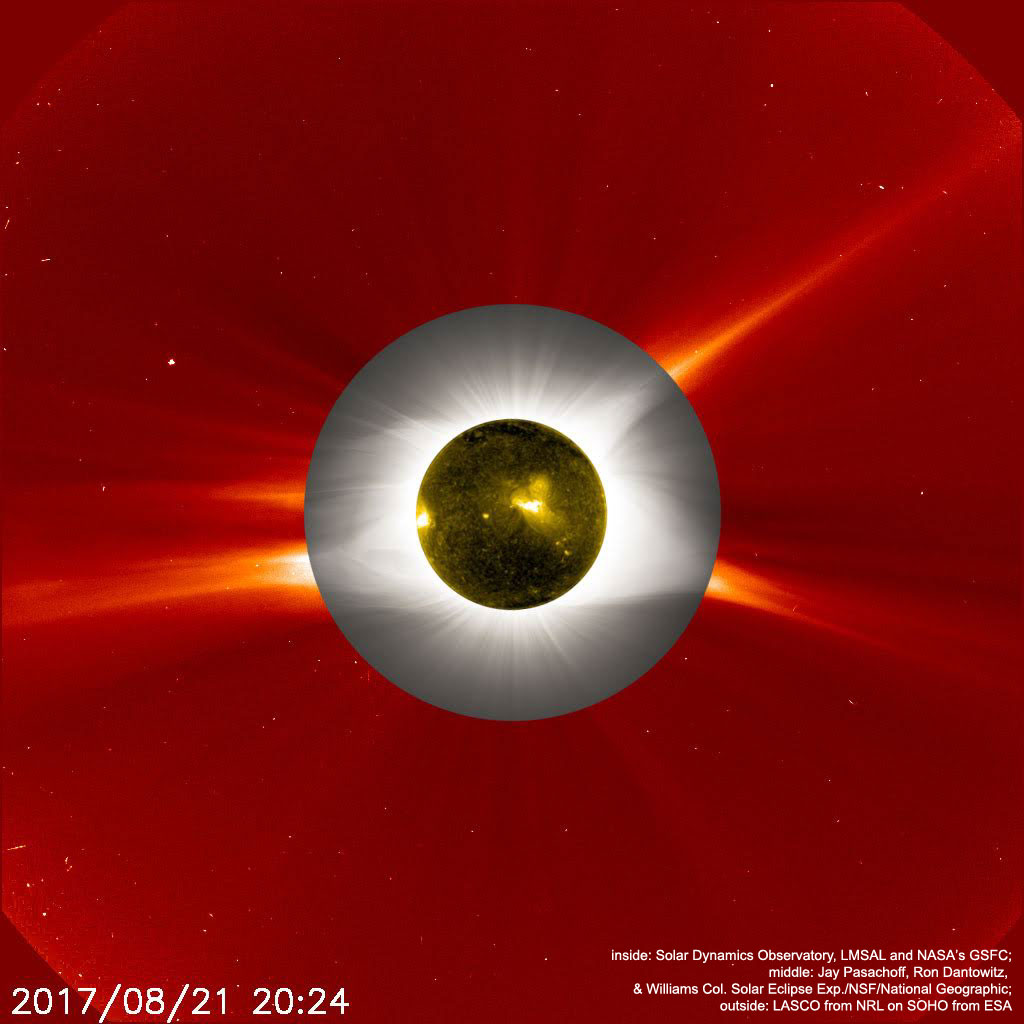 Neither rain, nor snow, nor dark of night can keep a space-based spacecraft from watching the Sun. In fact, from its vantage point 1.5 million kilometers sunward of planet Earth, NASA's SOlar Heliospheric Observatory (SOHO) can always monitor the Sun's outer atmosphere, or corona. But only during a total solar eclipse can Earth-based observers also see the lovely coronal streamers and structures - when the Moon briefly blocks the overwhelmingly bright solar surface. Then, it becomes possible to follow detailed coronal activity all the way down to the Sun's surface. In the outside layer of this composite image, SOHO's uninterrupted view of the solar corona during last month's eclipse is shown in orange hues. The middle, donut-shaped region is the corona as recorded by the Williams College Eclipse Expedition to Salem, Oregon. Simultaneously, the inner view is from NASA's Earth-orbiting Solar Dynamics Observatory, which, being outside of totality, was able to image the face of the Sun in extreme ultraviolet light, shown in gold.